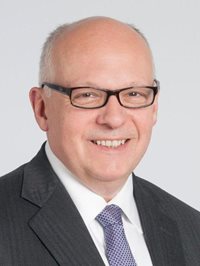 He joined the Glickman Urological & Kidney Institute in 2000, and became the Chairman of the Department of Regional Urology in 2007. Jones was Chief of Surgical Operations for the regional hospitals after serving in a similar role at Cleveland Clinic Fairview Hospital.  He became Vice President of Regional Medical Operations in early 2014. He also serves as Professor of Surgery at the Cleveland Clinic Lerner College of Medicine at Case Western Reserve University and holds the Leonard Horvitz and Samuel Miller Distinguished Chair in Urologic Oncology.

Castle Connolly lists him in “America’s Top Doctors” signifying ranking in the top 1% of all urologists as well as the top 1% of cancer physicians. He is consistently listed in “Best Doctors in America.” He has published over 200 manuscripts, more than 40 book chapters, and has written or edited 7 books.

Dr. Jones earned a BS in Zoology at the J. William Fulbright College of Arts & Sciences at the University of Arkansas, his MD at the University of Arkansas for Medical Sciences and completed his residency at Vanderbilt University. He earned his MBA from the Weatherhead School of Management at CWRU in 2010. His work was recognized by acceptance to Beta Gamma Sigma, the American Association of Collegiate Schools of Business Society for the Top 20% of MBA graduates.