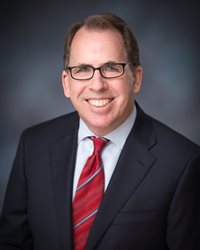 Dick Clark joined The Portland Clinic as CEO in the summer of 2015, bringing 30 years of senior management and healthcare leadership experience, a strong connection to Portland and its people, and enthusiasm leading the Clinic well into the next century of its existence and continuing to build upon past successes.

Prior to joining The Portland Clinic, Mr. Clark was asked to serve as Development Director of Providence Cancer Center and then Director of the Providence Together Capital Campaign, which exceeded its fundraising goal of $74 million. In 2008 he was elevated to Executive Director of Providence St. Vincent Medical Foundation, Providence’s largest foundation in its system with $185 million in assets.

He has been an active member of the Portland Rotary Club since 1996 and served as its President in 2007-2008.  He served for two years as Chair of the Oregon Ethics in Business Program sponsored by the Rotary Club of Portland. He was named the Club’s Rotarian of the Year in 2010 and 2014.